You all asked for a fast river runner that could play the eddy lines and seams along the way.

Well here ya' go! The Mullet is all business up front with plenty of rocker, and volume in the bow to boof, ender, and surge up and over obstructions, which also means plenty of foot room for you big ole boys. The low volume stern says ready to party. Squirt, splat, blast, and surf just about any feature as you slice your way down the river. Like it's cousin, the Braaap, the Mullet adopted its hull shape from modern slalom boat design. The kick rocker behind the seat lets the Mullet tilt back for quick pivots and snap carving turns into eddies. Whether you're learning the "oldskool" moves or you already know your way around an eddy line, this boat will become your go to design. For a more in-depth comparison of the Mullet vs. the Braaap, check out the FAQ's tab above.

What is the difference between a Braaap and a Mullet?

Many have asked us what the differences are between the Braaap and the Mullet. Like any cousins they share genes but not personalities. You can see their shared DNA in the slalom-inspired hull design, but the differences emerge as you take a closer look. The very origin of the Mullet design comes from the desire to play every seam, pillow, and wave in comfort and style. The Braaap's origin comes from the aspiration to run the river in a new and progressive way. Though the two boats volumes are similar by numbers, they have completely different distributions. The Braaap is more balanced for river running with a smaller tail to slice direction changes and, with practice, to squirt and splat well. The Mullet's volume is more asymmetrically distributed. The bow is big and flat to engage enders but remain up on the surface for river running while the stern is low volume and slightly scooped to engage seams and currents more easily. We maintained a similar length in the two boats so that speed would be a common theme. A simple difference is the overall size of the boats. Though larger paddlers can get in either the Braaap or Mullet, the Mullet will be a more comfortable ride for the bigger fellas and the Braaap can be used as a hard charging creek boat for those on the lighter end of the spectrum. That size difference is obvious up close but what most folks don't see is the 2" difference in width. The Braaap comes in at a nimble 24" wide that gives the boat a performance driven river running feel that makes any rapid fun to slalom your way down. The Mullet is 26" wide which makes it a more stable predictable river runner with the ability to slice its way downstream. Whichever boat you choose, you are entering a style of paddling that has been lost for many years and you get to do it with a modern hull design and Bad Ass Outfitting! 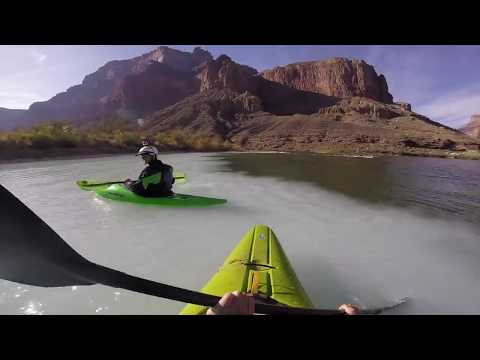 It's the boat I have wanted for a long time. I can run the river in comfort and play all the seams, splats, and surf waves along the way in style. Shane Benedict